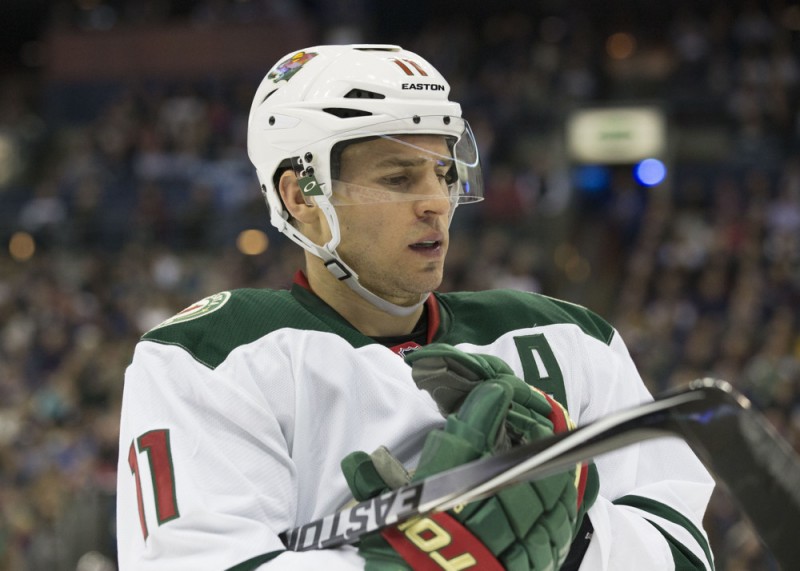 Despite the amazing surge they’ve put together over the last two months, the Minnesota Wild haven’t locked up a postseason berth just yet. In fact, the playoff picture in the West looks like that math problem Matt Damon had to solve in Good Will Hunting at this point. Anaheim, St. Louis, Chicago and Nashville are in. Beyond that, five to eight teams (depending on the day) are still fighting it out for the final four spots. It’s complicated.

We could sit here and discuss all the possibilities, but who wants to learn linear algebra? I certainly don’t want to write about it so, for the sake of argument, let’s just assume the Wild get in. Honestly, it should be a pretty safe assumption – they’re 21-6-2 since Jan. 15, after all. That’s more wins than Edmonton has all year.

If they do find their way into the playoffs, they’ll likely get the Blues, Predators or Ducks in Round 1. Whichever one it is, goals will be vital. And that’s where some have begun to question Minnesota. Just two players on the roster (Zach Parise and Nino Niederreiter) have more than 20 tallies this season, and just three other guys (Jason Zucker, Jason Pominville and Thomas Vanek) even have more than 10. Is that enough offense to push a team through the gritty Western Conference?

It just might be, for a couple reasons. First and foremost, Mike Yeo’s squad does score goals – in fact, their 2.79 per game ranks them No. 11 in the league. The offense is just spread out across the entire roster, rather than being condensed on one or two top lines. For example, Vanek started slow, but has picked up the pace considerably in the second half and is currently riding a six-game point streak. Meanwhile, Pominville is tied for the team lead with 31 assists, but somehow only has two in his last 25 outings. While a club like St. Louis features four guys with 20 or more goals (one of which has 34) and another five who have more than 10, the Wild have 14 players with at least seven goals. Overall, 24 different names have found their way onto the scoresheet at least once this season.

Which brings us to a philosophical question: is it necessary to have a go-to scorer in the NHL playoffs? Sure, it’s nice to be able to look down the bench and tell Sidney Crosby or Alex Ovechkin to jump on the ice in the closing minutes of a game. But this isn’t basketball, where you can just give your superstar the ball, get out of his way and tell him to finish the job. Hockey is much more fluid; your best players touch the puck for a fraction of the game. In other words, it’s not the worst thing in the world to have everyone pulling their weight, rather than relying on one superstar in crunch time. And it’s not like Minnesota is made up of a bunch of faceless hockey robots who are programmed to score exactly once every ten days anyway – they have Parise, who is more than capable of going off at any time.

Ultimately, the key to the Wild’s success will be – and already is – tied to the play of Devan Dubnyk and the defense in front of him. Dubnyk has literally started every single game since coming over in the deal with Arizona on Jan. 14. His 1.72 goals against average, .937 save percentage and five shutouts in that stretch are absolutely insane, and they quickly paint a picture of how Minnesota was able to turn this season around.

Can he keep those numbers up for another two months, if necessary? Common sense says no, but common sense would probably also suggest he should have slowed down already. And it certainly helps to have Ryan Suter anchoring a solidified, organized defense corps in front of him. Those elite numbers may drop a little, but even a slight regression should still be good enough to keep this group in most games.

That last point might be the most important. The Wild haven’t lost a game by more than one goal since Jan. 19 (3-1 to Columbus). Literally two months where they’ve either won or been in every contest until the final horn sounded. In a lot of ways, that’s what the playoffs are all about – hanging around and giving yourself a chance to grind out a win with the season on the line. And while their slow start to the 2014-15 campaign means they’ll likely cede home-ice advantage to most teams in the postseason, it’s worth noting that Minnesota is currently riding a franchise record eight-game road winning streak anyway. Chances are, they’re not going to get rattled by playing away from the Xcel Energy Center.

The Wild still have plenty of work to do just to get into the postseason, so nothing’s a given. But they’re basically playing with house money at this point anyway, and they’re not the sort of opponent that anyone is looking forward to facing. While their offense may not be overpowering, it sure seems to be working for them at the moment. And they’ve already been in survival mode for two months.