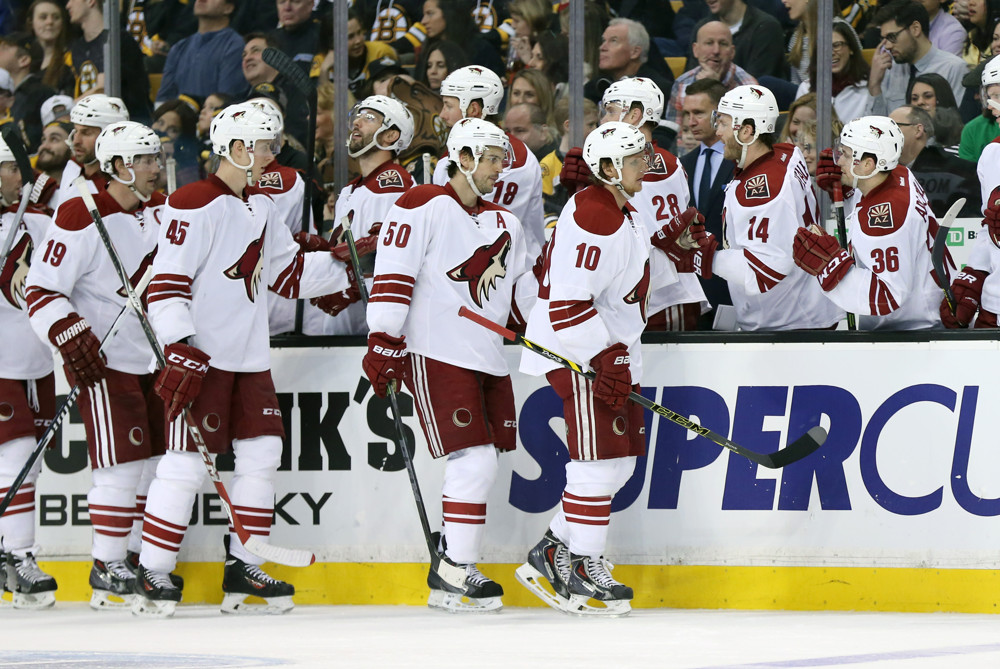 Tonight, the Arizona Coyotes and the Buffalo Sabres renew pleasantries, this time in Glendale. The teams met in the first leg of Tank-a-palooza Thursday night. The Coyotes won 4-3, but in true tank worthy fashion, it was an overtime win so that Buffalo also shared in the fruits of failure. It was a game that featured some very interesting happenings. Now, both teams will try to finish what they have started, the quest for the number one overall pick.

With that in mind, here are some reasons to be excited for Tank Wars Episode 2: The Wrath of Connor.

Reason #1: The Coyotes Fans Chance to Prove Themselves

Yesterday, Today’s Slapshot’s very own Anthony Perez detailed the questionable behavior of the Sabres’ own fans during the game on Thursday. Giving a sarcastic ovation for an opponent or one for your own team is fairly common, so common to be given a name, the Bronx Cheer. But openly rooting against the success of the home team is incredibly uncommon. The Sabres’ fans can get away with it, but if the Coyotes fans engage in a similar showing of disdain, things would get ugly.

So what’s a loyal pack member to do? Cheer til their face turns blue. Stand and cheer all game long. Cheer the opening face-off, cheer the first shot on goal, cheer the zambonis, cheer when an official announces a penalty on the Coyotes as “Phoenix penalty”, heck just cheer the officials in general just to mess with them.

In short, with the eyes of the NHL world turned on Glendale this evening, the Coyotes fans owe it to themselves to just cheer this game from start to finish. Whether the score is 1-1, 2-1, or 10-1, the Arizona faithful have a chance to show up the Buffalo fans and earn some positive press in their favor.

Many eyebrows were raised when the Sabres announced they were starting Matt Hackett against the Coyotes on Thursday night. Hackett had only made three starts on the season in advance of Thursday’s game. He hadn’t won any of the three.

The Coyotes countered with their regular netminder, Mike Smith. Smith has actually been really good in recent weeks, with a .933 save percentage in 5 on 5 situations since February 1st and a .922 overall. The .933 full strength save percentage is 11th out of 31 NHL netminders with at least 600 minutes played in that time.

Arizona had a chance to change course and start Smith’s backup, Louis Domingue, but stayed the course and played Smith. And they won. As of Monday morning, Smith was the expected starter and Buffalo would be starting normal number one Anders Lindback. Well, normal number one since the trade deadline anyway. It will be interesting to see if those assignments stay true.

The Sabres are currently the worst offensive team in the NHL, scoring 1.81 goals per game. The Coyotes are the second worst at 2.04. The Sabres have been offensively impotent for the last two seasons and Arizona was putting up some truly ridiculous numbers since January 1st.

The Coyotes are offensive, but not in a good way http://t.co/x0gnGEdY6M pic.twitter.com/S2x8eUWDvs

Well, technically, they weren’t putting up the numbers as much as they were failing down to them. Arizona has found a way to score 11 goals in the past three games. They had 10 goals in the first ten games they played in the month of March.

Buffalo has been just as bad. They are 1-8-3 in 12 March hockey games with 20 total goals scored. But the game between two teams that barely score two goals a game featured seven total tallies. After that level of inspired play, it wouldn’t be a surprise if the final score of this one is 1-0.

The Sabres have been in tank mode from the beginning of the season. They put together a team that finished last in the league in 2014 and added nothing to improve that roster for this season after losing the NHL draft lottery to Florida. Arizona started the season with playoff hopes that quickly evaporated due to poor offense and even worse defense. Injuries to top 6 forwards Martin Hanzal and Mikkel Boedker really had the wheels fall off as the Coyotes fell all the way to last in the Western Conference.

At least with all that suffering, there is a light at the end of the tunnel and that is Connor McDavid. The expected number one overall pick in the draft is a generational talent that could come right in and change the fortunes of any franchise lucky enough to draft him.

Right now, the odds favor Buffalo getting the number one pick since they have the league’s worst record. The Coyotes are behind them but unlikely to pass them (or be passed by them technically) with six more points than the Sabres but Buffalo has a game in hand.

Buffalo has been waiting for Connor McDavid since they lost last year’s draft lottery. The Panthers won that lottery with the league’s second worst record. The position that Arizona finds themselves in currently. The game tonight won’t be a masterpiece of hockey artistry. It’s likely to be sloppy and full of penalties and blown assignments. But it won’t be short on drama. For two teams, for one amazing talent, and for the future of the NHL.

You should be watching.

Flames are Hanging from the Playoff Bubble
Los Angeles Kings: Who Should Stay, Who Should Go