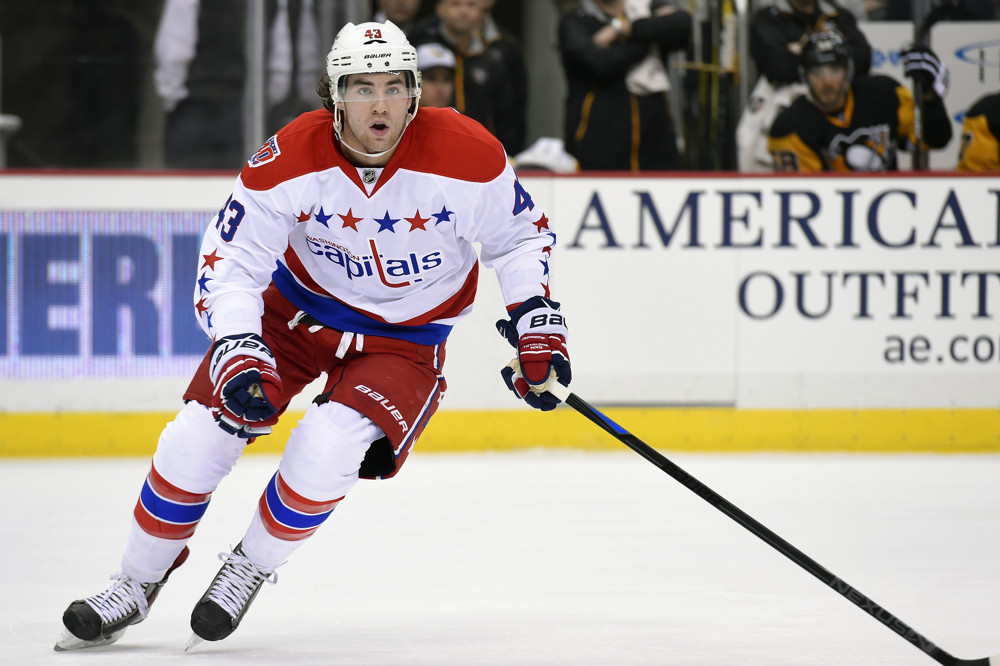 Tom Wilson blocked a shot with his head on Sunday, April 5th, in Washington’s 2-1 victory over the Detroit Red Wings.

He’s been on the road to recovery ever since — and although the team hasn’t ruled him out of the post-season with any concussion diagnosis, the 21-year old forward is still unconfirmed for the team’s opening playoff contest. Although he hasn’t been ruled out for the game — which is Wednesday at 7:00P.M. at the Verizon Center, where the Capitals will take on the New York Islanders — the team is still approaching the situation with caution.

So, it seems, is Wilson.

Alex Prewitt of the Washington Post quoted Wilson, when asked about how to handle head injuries, as making no jokes.

“You’ve only got one brain,” insists Wilson, “and you’ve got to treat it well and treat it right.”

The young right wing is no stranger to bumps and bruises; his style of play is somewhere between a crash-and-bang puck-mover and an outright enforcer. He drops the gloves, lays devastating hits, but flies up the ice as often as he can to set up his teammates and help redirect the play in Washington’s favor. He’s an enthusiastic forward who manages to click surprisingly well on a top line with Alex Ovechkin and Nicklas Backstrom, but he’s as willing to fall flat on his face during a play as he is to trap another team in the corners while Ovechkin and Backstrom make magic.

It’s somewhat surprising, therefore, that he sounds so much more mature than players twice his age when it comes to handling head injuries. 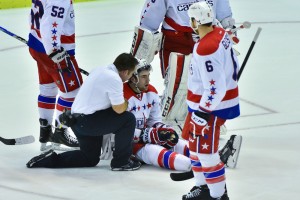 Not every NHL player looks at injuries the same way. Some, like Pascal Dupuis of the Pittsburgh Penguins, have openly admitted to playing through life-threatening injuries just to stay in the game. The league widely regards Boston Bruins forwards Gregory Campbell and Patrice Bergeron as ‘gritty heros’ for playing through injuries, as well — Campbell took a shift on a broken leg, while Bergeron became renowned for pushing through broken ribs and a punctured lung just to stay on the ice. We’ve seen skaters return from concussions with tinted visors to help alleviate the all-too-common light sensitivity that comes in the wake of the league’s most common head injury, and there was plenty of controversy when it seemed that Columbus Blue Jackets forward Matt Calvert had lied to the coaching staff about when exactly his most recent concussion was sustained.

It seems obvious that safety should come first, but there’s still plenty of pressure to ‘tough it out’. The fan reaction when NBA star Derrick Rose suggested his family would have a say in whether he returned to the court — which was largely critical of the Chicago Bulls guard, suggesting he was taking ‘the easy way out’ and ‘not being a man’ about playing a professional sport — suggest that it’s a lot harder to be outspoken about safety coming first than one might expect. At 21, Tom Wilson is still trying to prove himself on the ice (and he’s got plenty of public criticism to show for it) — so being so frank about head injuries and not trying to rush back into the lineup is unexpected, if not all that surprising. The young forward is quietly becoming a leader on the Capitals — and a good showing in the post-season, barring his return, could earn him more security in a Washington lineup.