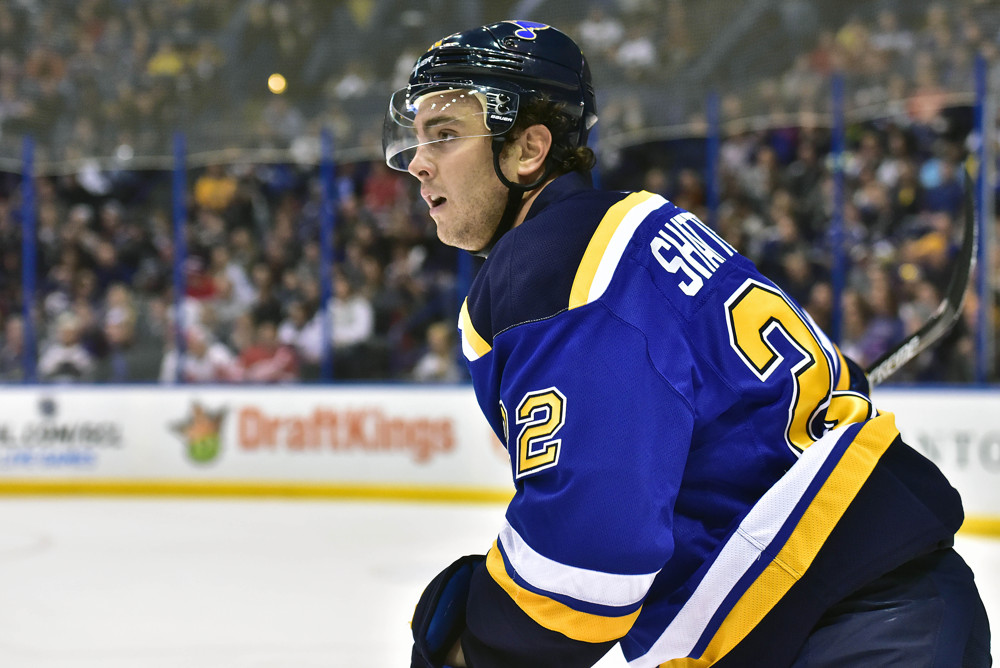 At the NHL trade deadline, the Blues bolstered their depth and strength on defense, now that their blueliners are getting healthy, Coach Ken Hitchcock has some difficult decisions to make.

The return and debut of Zbynek Michalek Saturday night gives the Blues eight healthy defenseman and a ninth on the mend. The problem is all eight and eventually nine are NHL ready defenseman. So who do you sit?

These were the defensive pairings Saturday night against Minnesota:

The core six defenseman seem set for the Blues, but perhaps their best defenseman, Kevin Shattenkirk, is expected to be back for the playoffs.

The idea will soon present itself for Ken Hitchcock to consider dressing seven defensemen, at least in the playoffs. That leaves Chris Butler as the odd man out, ready for come on in emergency or in case of injury.

As well as he’s played, the most difficult move the Blues will make is sending rookie Petteri Lindbohm back to the AHL Chicago Wolves. Lindbohm deserves an NHL spot with his gritty and solid play on the back end. But he may be poised to start next season in the NHL considering the depth and experience the Blues carry on defense without him.

Lindbohm’s excellent play has pushed other defensemen to step up their game, making sure they don’t become the healthy scratch. Hitchcock has said it doesn’t matter who you are.

“If there’s a guy that’s nicked up and we can get a better player in there, we’re going to do that, but we’re playing our best 20. If we feel like a guy’s under-performing, we’re going to pull him out,” said Hitchcock.

The coach has said Lindbohm deserves a spot on the team, but the Blues made a roster move at the trade deadline leaving the option open for him to return to the minors.

#stlblues did put Petteri Lindbohm on Chicago Wolves roster for the purpose of making him eliginle for AHL playoffs. Recalled immediately.

The defenseman that has emerged since the deadline is Robert Bortuzzo. He has given the Blues exactly what they need down the stretch and looking ahead to the playoffs.

The pairing of Bortuzzo and Jackman physically punishes opposing forwards, especially on the rush. The Blues will need that kind of toughness to survive in the difficult Western Conference playoffs.

The idea of dressing seven defensemen in the playoffs would also keep the back line fresh and able to withstand the constant pressure and physicality in the playoffs.

The Blues are 11-6-1 since the loss of their top defenseman Shattenkirk. With his return coming, the addition will make the defense one of the most dynamic groups in the NHL.

The Blues defense has skill and skating ability with Shattenirk and Pietrangelo. They have toughness and grit with Bortuzzo, Jackman and Michalek. Mix in the defense of Gunnarsson and Bouwmeester and the Blues are built to last in the playoffs.

If the Blues decide to dress seven defensemen for the playoffs, a forward will have to sit. The will raise the competition in the locker room down the stretch even more. Hitchcock has said he doesn’t want to “tinker” too much with the lineups every game. The Blues already carry an extra man with Olli Jokinen. Players that have been health scratches in the last five games include Chris Porter, Patrik Berglund and Marcel Goc.

Patrik Berglund will return to the #STLBlues lineup in place of Marcel Goc, who will be a healthy scratch for the second time in a week.

Patrik Berglund seems to be the most notable scratch this past week. Berglund has been a top six forward for the Blues but has been through a lot this season. He was the topic of trade rumors for more than a month, but it seemed to improve his game. While many fans in St. Louis seem to have grown tired of Berglund, the fact remains he is a critical player to the team and a big body needed in the playoffs.

Ultimately Ken Hitchcock will have to make some extremely tough decision choosing who plays and who sits. All of his options are NHL ready. Hitchcock has 700 wins under his belt, so he has made a tough decision or two in his legendary coaching career, and the decision he has to make is a pretty good problem to have.