Scott Darling was once a highly-touted goaltending prospect.

NHL fans were first introduced to Darling during Corey Crawford‘s iconic Rise Against injury, when he and backup Antti Raanta split the net for nearly a month to keep Chicago in the playoff race. At the time, he was just considered one of the team’s career minor leaguers — although his play far surpassed what anyone expected, and the team was faced with a pretty tough choice when Crawford returned.

Everyone was impressed that the former SPHL netminder had worked his way from the lowest level minor league to the NHL — and was holding his own — but when his life story was reported by the Hockey News, everyone was in awe.

Originally drafted by the Phoenix Coyotes back in 2007, the 6 foot 6 netminder looked like he was going places. Starting in net for the University of Maine, the Coyotes checked up on him regularly to see if the NCAA couldn’t produce a franchise goaltender in time — although he had some trouble with rebound control his draft year, Darling seemed athletic enough to eventually develop into a lethal threat in net.

Three years later, though, Darling was finishing up his sophomore season at Maine — only he wasn’t on the ice.

Suspended indefinitely for violating the team’s rules regarding alcohol and game protocol, Darling made a public apology to the team’s fans — but didn’t get much better. Fast forward a year, and he had been cut by the Coyotes, then the Louisiana IceGators of the SPHL.

At that point, Hockey’s Future stopped updating his prospect page. If you go there today, his talent rating is a 3; his probability of success grade is an outright F. Under talent analysis, he’s still listed as large and athletic — but when you look at his future analysis report, this is all you get:

After a forgettable season in the SPHL, Darling’s pro career seems destined to continue in the low minor-leagues and he is likely not in the Coyotes plans moving forward.

His goaltending coach fired him for drinking and slacking on his workouts, but he made a turnaround.

The goaltending coach who cut him loose in 2011 hired him a year later ‘at minimum wage, order[ing] him into the weight room to lose the 40 extra pounds he was carrying’. He pushed himself into the ECHL, then was noticed by goalie coach Mitch Korn — and through a stroke of good luck, his agreement to a two-way deal between the ECHL and the AHL came right around the time of Pekka Rinne‘s injury last year. He was given the opportunity to move up to the minors with the shift in depth to accomodate for Rinne’s absence, and by the next year he was an AHL mainstay.

Fans know him from this point on; after arriving in the AHL on a full-time basis to start the 2014-2015 season, Darling saw himself taking NHL ice after Crawford’s fall. He’s now back with the Blackhawks for at least two additional years — the team inked him to a hefty extension — and he’s the Chicago Pro Hockey Writers Association’s choice for the Masterton Trophy. Awarded to the NHL player who ‘best exemplifies the qualities of perseverance, sportsmanship, and dedication’, Darling seems like the ideal choice — of all the success stories, his may have the widest arc.

He’ll have some hefty competition. The Pittsburgh Penguins have nominated Kris Letang, whose multiple concussions and stroke haven’t stopped him from being there for his teammates and the Penguins community time and time again. There’s also Andrew Hammond, whose miraculous streak with the Ottawa Senators make him another AHL call-up worthy of competing with Darling for the hardest-working, most persevering player. Patrick Eaves spent part of the season with his jaw wired shut, and Patrice Bergeron has all but dragged his team to the precipice of the post-season, despite a lack of on-ice personnel and plenty of belief that the Bruins were going to fall apart. The Minnesota Wild haven’t announced their nomination yet, but it’s likely to be either Devan Dubnyk — who spent part of last season living in a hotel in Hamilton following his oust from the starting role in Edmonton — or Zach Parise, who’s dealt with both a concussion and his father’s passing mid-season.

He’s also looking back at some award winners who have been through everything from an MS diagnosis to non-Hodgkin lymphoma; for some, ousting yourself from your college hockey program because you drank too much doesn’t seem like it belongs in the same conversation.

Darling insists he’s not an alcoholic, though; he simply believes that he’s got to believe in himself, and drinking makes that harder. He hasn’t drank since deciding to turn his life around in 2011, and he’s now a strong consideration for an NHL backup role next season; it’s always tough to predict the Masterton winners, but Chicago’s interim backup deserves some strong consideration. 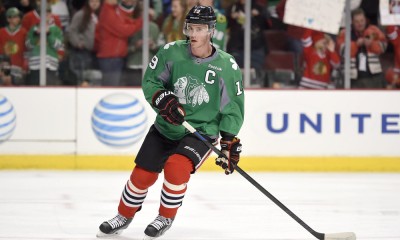 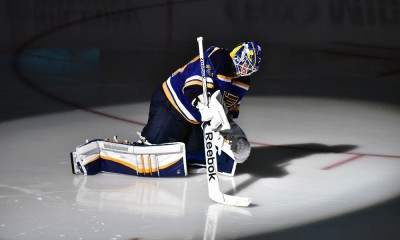 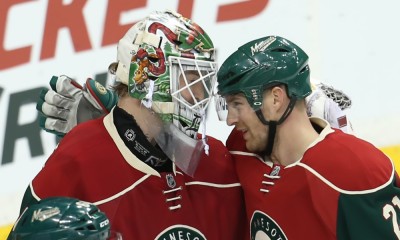 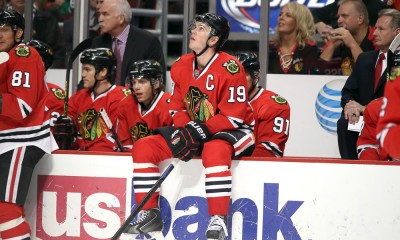