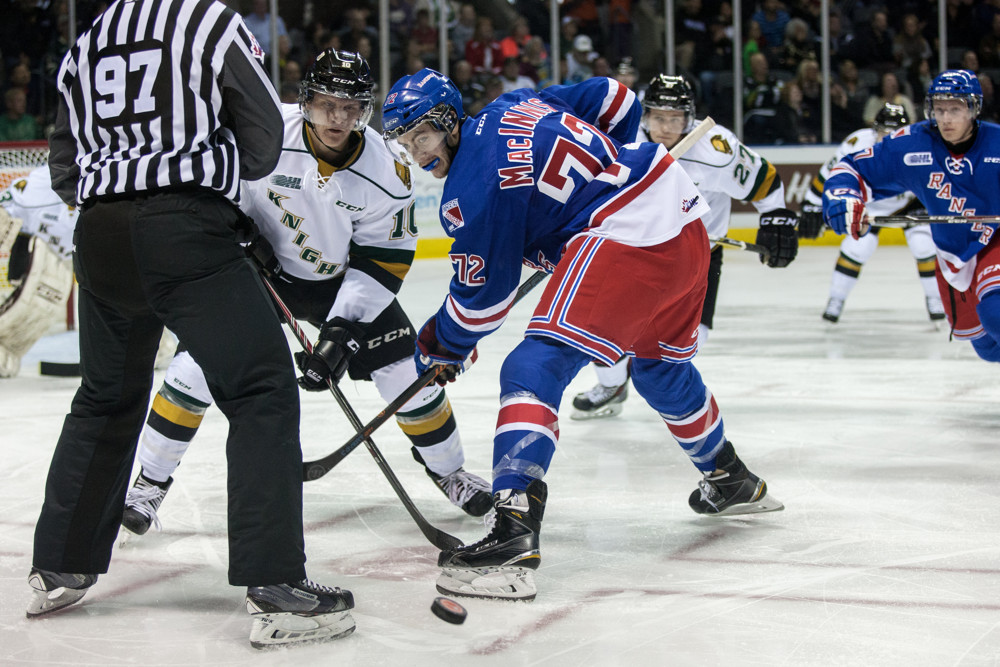 Do you remember Al MacInnis?

The six foot one defenseman led the Calgary Flames to a Stanley Cup in 1989 — where he was named the tournament MVP and Conn Smythe winner — and a decade later, found himself walking up to receive the Norris Trophy for best defenseman as a member of the St. Louis Blues.

Following his retirement from professional hockey, MacInnis settled in St. Louis with his wife and four children — one of which inked his first NHL contract on Friday afternoon.

Ryan MacInnis was drafted by the Arizona Coyotes in the second round of the 2014 NHL Entry Draft, taken 43rd overall just a few spots before fellow Coyotes prospect Christian Dvorak. At six foot four, the forward towers over his dad — and he’s got the offensive talent to headline for his OHL Kitchener Rangers.

The team confirmed that MacInnis had signed with the club on Friday, just a week after he and the Rangers were eliminated from the CHL post-season by none other than Max Domi and Dvorak’s London Knights team. Although the team hasn’t disclosed the details behind the three-year entry level deal, it’s likely that he’ll be signed to an ATO shortly and will report to the Portland Pirates, Arizona’s AHL affiliate, who are still in the playoff hunt.

Although MacInnis’ defensive game still leaves plenty to be desired, he’s fast and big — something that many of the Coyotes’ top prospects don’t necessarily boast. Domi is barely 5 foot 9 (although he’s got the low center of gravity that makes him hard to knock down and a smart style of play) and other stars like Tobias Rieder and Mark Arcobello are under six feet as well; adding some significant height to the lineup through MacInnis will work wonders. He’ll likely be fighting for a spot first with Coyotes prospect Henrik Samuelsson, who was picked late in the first round of the 2012 NHL Entry Draft, as they’re both big-bodied forwards without the bulk of Lucas Lessio or the two-way smarts of Dvorak — and as such could easily see himself reassigned to the OHL for one final season next year.

For now, though, adding size through MacInnis is a promising step for Arizona, especially given the fact that he’s been able to lead an offensive charge for his score-weakened club in Kitchener for two seasons now. If he’s able to bring the scoring ability that Arizona’s two way players lack, the team could look lethal even sooner — although he didn’t crack 100 points like the London Top Line Trio (in 67 regular season games, MacInnis took home sixty-two points and contributed eight more in six playoff games), he could be a scoring depth winger in the future.