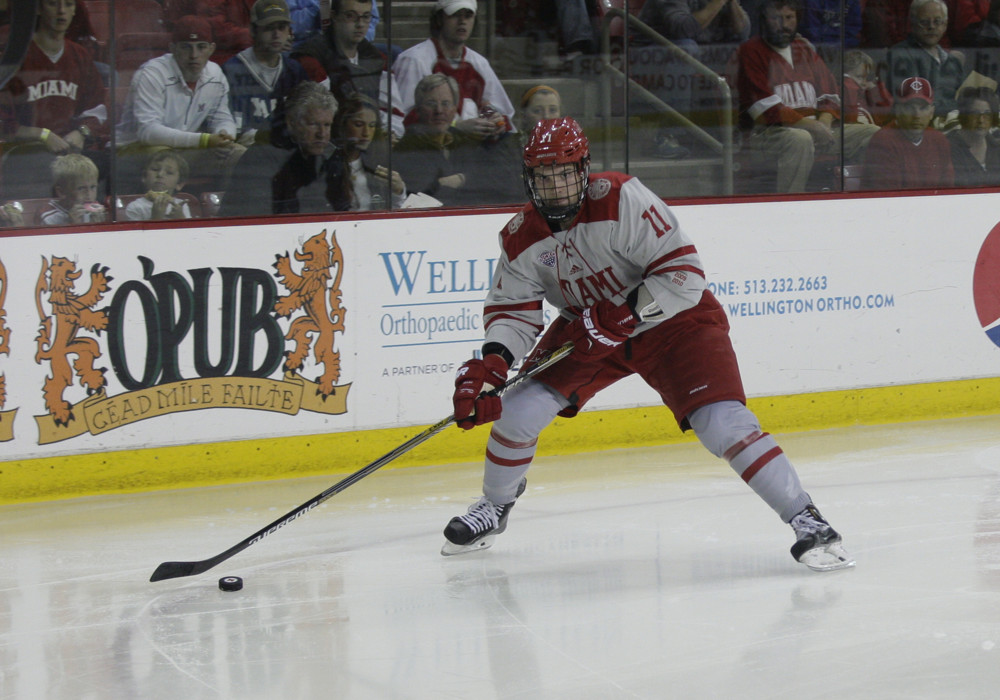 Riley Barber is one of the many skaters from the iconic Miami Ohio game who’s getting some serious recognition following the NCAA tournament.

Ultimately, Miami OH went down in spectacular style on March 28th — but not before staging a four-goal deficit comeback by pulling their goaltender with twelve minutes left in the game against Providence College, the eventual NCAA champions. They spent nearly a quarter of the game with the net empty to provide an extra attacker — and even made one of the most iconic saves of the tournament when defenseman Louis Belpedio dove for the net and skirted the puck to the outside of the posts — and pulled within a single goal of their opponents before an empty netter for Providence sealed the deal.

Austin Czarnik, alternate captain of the Miami Ohio club, has already been inked to an entry level deal with the Boston Bruins. The goaltender who allowed their three extra-attacker tallies over an eight minute time span, Jon Gillies (named the MVP of the Frozen Four tournament), has opted to leave Providence and signed with the Calgary Flames. He may even get a chance to play with them in the post-season — the Flames recalled Gillies the day he signed his entry level contract, and he’s in Vancouver with the club for round one of the playoffs.

Now, Riley Barber has been inked to a deal of his own.

The Livonia, Michigan native — born in Pennsylvania, raised in the hockey state — has been signed to a three year entry level contract with the Washington Capitals, who selected him in the sixth round of the 2012 NHL Entry Draft.

He was a sleeper pick, more so than almost any other in the NCAA — by 2013, he was a member of the iconic Team USA roster that took gold at the U20 World Junior Championship, and took over as captain the following season. He was a standout player among a roster of standout players, many of whom are already making waves at the NHL level — Johnny Gaudreau and J.T. Miller are simply waiting on top line winger Jimmy Vesey to graduate from Harvard and join them in the big leagues, while Connor Murphy is heading with Vesey to the 2015 IIHF Worlds this summer following the Arizona Coyotes missing the post-season altogether.

Initially perceived as a risky pick because he wasn’t a ‘standout’ in any one talent category — simply sitting at ‘above average’ in every situation — Barber is an underrated player who fits the bill of ‘jack-of-all-trades’. At 6 feet even, he’s big enough to handle the more powerful competition he may face around the NHL — unlike former teammate and scoring leader Czarnik, who’s lucky to hit 5 foot 9 — but he’s fast enough to keep up with some of the more elite competition. He’s not his team’s leading scorer — as mentioned above, that was Czarnik — but he’s one of the top scorers in the country, and projects to fit a good two way role in a middle six line for Washington long-term.