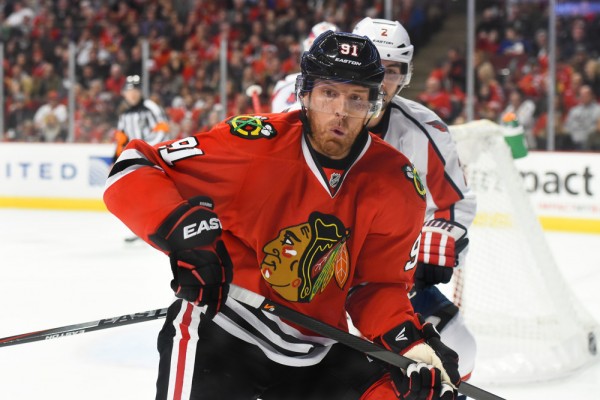 Another successful week for the division has come and gone. The seven teams combined for an overall record of 16-6-1. Yet another impressive weekly record for the teams that make up the toughest division in the NHL.

Highlight of the week

Scott Darling makes one of the saves of the year

There is a new number one in town, and that is the Chicago Blackhawks. The ‘Hawks looked extremely impressive this week, posting a record of 4-0-0 while outscoring their opponents 13-4. They started the week with two road wins over the Arizona Coyotes and a dominant 6-2 win in San Jose over the Sharks. They returned home to United Center to welcome the New York Islanders with Chicago dominating from the opening puck drop to go on to a 4-1 win. Marian Hossa and Jonathan Toews combined for six points in the win over the Isles.

Chicago ended its week with a 1-0 home victory over the New York Rangers with number two netminder Scott Darling stopping all 25 shots he faced.

It’s tough to drop the Blues a spot this week after they had a nice seven-day stretch with a 3-1-0 record. They shut out the Philadelphia Flyers, winning in a 1-0 shootout decision, which was followed by a 3-1 loss at home to the Minnesota Wild. The Blues then returned to their shut out ways defeating the Dallas Stars 3-0 and the Calgary Flames 4-0. Brian Elliott went 2-1-0 in net with Jake Allen shutting out the Stars on the road.

The Wild continue to ride Devan Dubnyk and his hot hand in net. He has started 28 straight games for Minnesota. This week he and his hockey club went 2-1-0 with impressive wins against the Nashville Predators and the Blues. The only loss of the stretch came at home to the Anaheim Ducks via a score of 2-1. Minnesota sits in the number one wild card spot in the Western Conference with 85 points. It has been quite the turnaround since Dubnyk arrived as the team has gone 21-5-1 with him between the pipes.

The Jets continue to hang on by a thread in the final wild card spot in the West with 82 points and 12 games left on the slate. Winnipeg went 2-1-0 for the week with their lone loss being a 5-4 defeat in Florida handed down by the Panthers. The Jets’ two wins were rather impressive as they defeated the Tampa Bay Lightning on the road 2-1 followed by a dominant 5-2 home win over the Sharks. If the Jets can continue to have seven-day periods with a 2-1-0 record this team should see the post season.

Things have been bad in Preds land. Nashville has dropped nine of their last 11 games and five straight home games. James Neal has missed the past two games with an upper-body injury and is listed as day-to-day and Filip Forsberg hasn’t scored a goal since February 24. The Predators had a tough week, playing four games in seven days including three of which were in the state of California. They dropped games against the Sharks, Ducks, and Wild with their lone win coming in Los Angeles against the Kings.

#Preds in very serious danger of going from a 9 point lead in the division on Feb. 24 to 3rd in division and losing home ice. Free fall.

The Avalanche have gone back and forth between the number six and seven spots for weeks now. They aren’t the worst team in the division and their season surprisingly isn’t ‘over’ just quite yet. After an undefeated 2-0-0 seven-day stretch the Avs are seven points out of the final Western Conference wild card spot with 13 games left on the slate. They defeated the New Jersey Devils and Calgary Flames on home ice for the week.

Well, the Stars have been the same old Stars for weeks now. Tyler Seguin continues to be the bright spot on this team with 62 points on the year but with 12 games left in their season and eight points out of a playoff spot things aren’t looking too promising in ‘Big D’. The Stars got road wins in Carolina and Washington and ended the week with a home loss to the Blues where they were shut out 3-0.