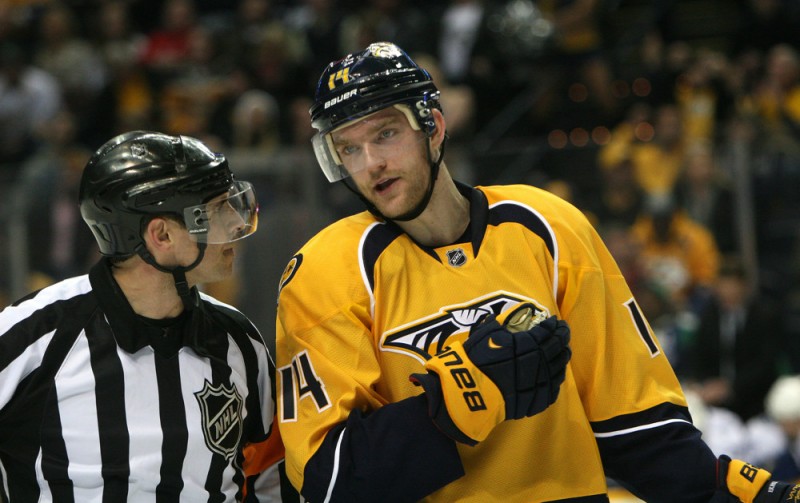 The 2014-15 regular season is slowly but surely coming to an end and there are three teams in the Central Division that are all but certain to play more than 82 games this season. The Nashville Predators are the surprise squad of the bunch to make the post season. Nashville has 13 games left this season. The Chicago Blackhawks and St. Louis Blues each have 15 games left before playoff hockey begins.

With just a limited time left and the three teams mentioned being in such a tight race, it’s worth looking at what each sure playoff team may be hoping for when the regular season comes to an end and their lesser desires as well with a shot at the Stanley Cup at hand.

Nashville has been playing its worst hockey of the season as of late, dropping seven of its last eight games played all in regulation. They sit second in the division despite the poor play and are tied with the Blues in points, but St. Louis holds the advantage with two games in hand.

The backbone of their team is in net with Pekka Rinne who can steal games any given night. Rookie phenom Filip Forsberg continues to shine, the blue line is strong with Shea Weber and Roman Josi leading the defense corpse, and veterans Mike Fisher, Mike Ribeiro, and Matt Cullen contributing in a major way. They’ll be looking for James Neal to awaken sooner rather than later after scoring just one point in the last 11 games.

Best Case: The Preds of course get back to playing the impressive hockey they did for the first three-fourths of the year. If they do that they can win the Central and host a Western Conference wild card team to begin the playoffs. Home ice will be very important for the Predators as they are 26-7-1 in Music City.

Worst Case:  The Predators continue to struggle in a major way as they have for the past two and a half weeks and drop to third in the division. Dropping to third means a date against the ‘Hawks or Blues is all but certain, but with the Predators losing out on home-ice advantage.

The Blues have been one of the more steady teams in the NHL all season long. Their longest losing streak of the year was four games (0-3-1) towards the end of December. The Blues are now winners of three straight and have fought their way back to the top of the Central due to solid play and the Predators’ miniature collapse that is happening. All in all, the Blues are a legitimate threat as the post season looms large.

Best Case: The Blues continue their solid and consistent play to close out the season and win the Central division title for the first time since the 2011-12 season. They are 2-3-0 against Nashville and 1-2-0 against Chicago so far this season with two meetings left against the ‘Hawks. St. Louis would surely love to take the division crown and play host to a wild card team to begin their march towards a Cup.

Worst Case: The Blues simply stumble down the stretch, the Blackhawks get things rolling along with the Predators, and they finish third in the division to see Chicago in the opening round with Windy City playing host to what would be an epic opening round.

The Blackhawks have had their fair share of ups and downs this season, but their ups have certainly outweighed the downs and they’ll be fighting for a Stanley Cup. Patrick Kane most likely won’t be ready to go until at least the second round of the playoffs, but they have gone 4-1-1 without Kane in the lineup.

Best Case: The best case for Chicago is to sneak into being the No. 2 team in the division to secure home-ice in the post season. Nobody wants to go into United Center period let alone in the playoffs. If the ‘Hawks can snag home-ice you can’t count this team out to make a legitimate run towards a Cup.

Worst Case: The Blackhawks do hold a five-point advantage on the fourth place Minnesota Wild, and with one game in hand it doesn’t seem likely they’ll swap places with them in the standing. Even with Devan Dubnyk emerging as the hottest goalie on the planet, nothing is impossible.

How the Blackhawks are Winning Without Kane
St. Louis Blues Facing Crowded Lineup