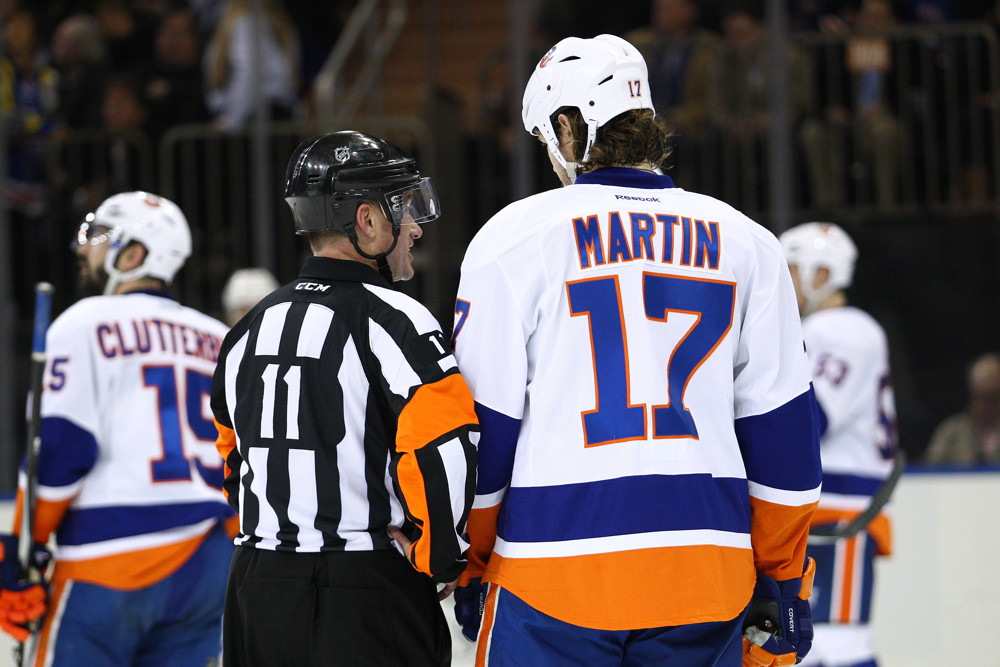 It was announced Wednesday morning that New York Islanders forward Matt Martin would be given a phone hearing for his knee on knee hit to Dallas Stars defenseman Trevor Daley.

With the playoffs fast approaching, the league made it quick; less than twelve hours later, they’ve delivered a one-game suspension for the hit.

The Department of Player Safety issued their standard video, explaining exactly why Martin was delivered a suspension at all — and then, why it was only one game.

As the video above explains, Martin’s suspension is significantly lower than one would normally see with a knee-contact hit since it’s fairly clear that the didn’t intend the hit ‘maliciously’ — regardless of intent, though, the play was deemed reckless and therefore resulted in punishment regardless.

The video points out — maybe more vital to the reasoning than anything else — that Daley didn’t do anything unexpected that would normally contribute to a clean hit resulting in injury. This was simply chalked up to Martin’s lack of motor control, which — while not considered to be dirty in nature — isn’t a valid justification for an illegal check. As league regulation specifically prohibits checks that lead with the knee, Martin can’t use his loss of control when it results in leading with the knee. The DoPS adds that Martin did ensure the check would be completed, which resulted in his loss of control and the subsequent hit; since he could have avoided delivering the hit by leaning out of his leg instead of in, the league chose to deliver the suspension.

As a bottom six forward who averages a little over eleven minutes of ice time, Martin’s presence isn’t an absolute must heading into the post-season — so one missed game, in the grand scheme of things, will do little to hurt the Islanders in the regular season.

Considering the league has been known to buckle down more in the post-season, though, this is likely a lesson for the fresh-faced Islanders.

For the Stars, though, this is the final blow against what already looked like a near-impossible shot at seeing playoff action; with both Daley and centre Tyler Seguin out, Dallas will have to start looking ahead to the 2015-2016 season.