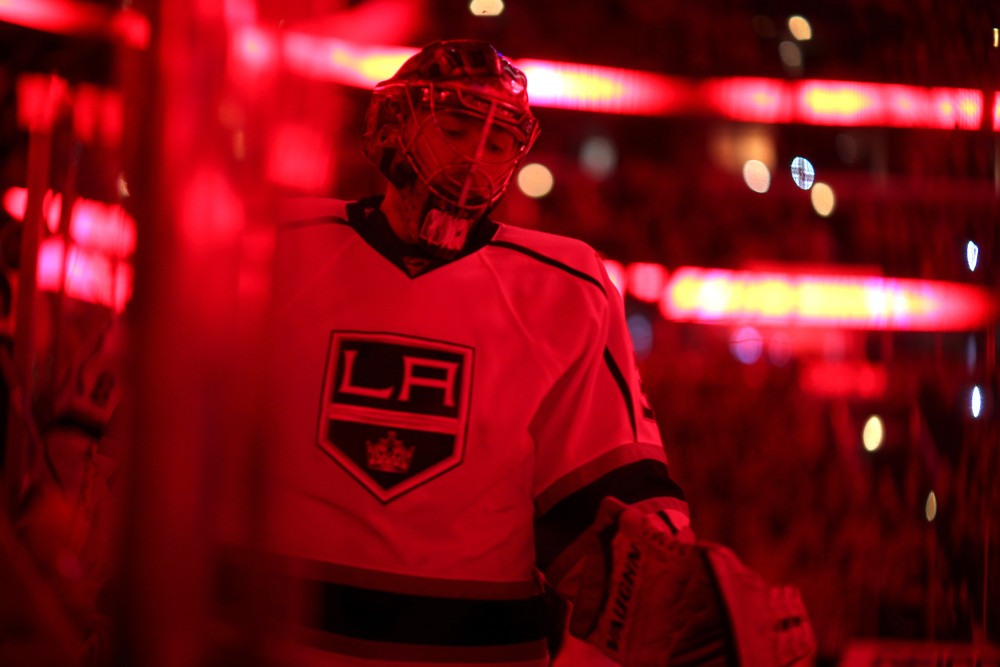 The Los Angeles Kings lost 4-2 to the Edmonton Oilers on Tuesday, but they still had a chance to make the playoffs.

With the Winnipeg Jets playing the Colorado Avalanche on Thursday night, a regulation loss by them — plus a win by the Los Angeles Kings — would have thrown the Western Conference into turmoil, not unlike the situation back east. That would have given the Kings 95 points with one game to play, pulling them ahead of the Calgary Flames (who would have been stuck with 93 points) and within one point of the Jets, who would have had 96.

Instead, the Kings dropped a 3-1 decision to the Flames themselves, and eliminated themselves from the post-season as the first defending Stanley Cup champions to do so since the Carolina Hurricanes did it back in the 2006=2007 season.

The Flames pulled ahead with a fairly early lead, going up 2-0 on the Pacific Division powerhouse despite getting outshot throughout the game. Jordan Nolan came close to bringing the Kings back into the game with a goal in the third period, but an empty net clincher from Calgary earned the Alberta franchise their first playoff berth in five years.

To finish off the season, the Kings will play the San Jose Sharks — and although they would have the opportunity to tie Calgary in points with a regulation loss by the current third place team in the Pacific, they would lose out on the NHL’s ROW tiebreaker system. With only 37 regulation/overtime wins this year, Los Angeles couldn’t even pull even with Calgary in that category with a win on Saturday — the Flames have earned 40 victories outside of the shootout this season, giving them the final say with one game left to play.

For the Kings, this could mean a few changes.

Known as the ‘clutch playoff team’, the Los Angeles franchise — who snuck into the playoffs only to upset higher-seeded franchises en route to championships in 2012 and 2014 — failed to pull themselves out of an early season bout of mediocrity in enough time to earn a playoff berth. Trouble on offense and a refusal to address their weakened blue line following the Slava Voynov suspension left the Kings with little to make themselves stand out as the season wore on; a season-ending injury for rookie Tanner Pearson took away a chunk of their scorepower, and the final nail in the coffin — the decline of Mike Richards — ultimately hurt Darryl Sutter’s roster too much to ignore.

They aren’t the only Western Conference team feeling a little shell-shocked, though.

Of the three California teams, only the Anaheim Ducks will see post-season action — the San Jose Sharks eliminated themselves from the playoff race with a 5-3 dropped decision to the Arizona Coyotes on Saturday, earning their first spot on the outside looking in in the last decade. They’re joined in the Central Division by the Dallas Stars (whose defensive collapses all season long have been their undoing) and the Colorado Avalanche — who just haven’t seemed to click — in being teams to slip out of the post-season early on.

The only three teams left with undecided fates now are in the East — and with both the Boston Bruins and the Pittsburgh Penguins sitting poised to slip out of the post-season as well, this could be the year of upsets abound.