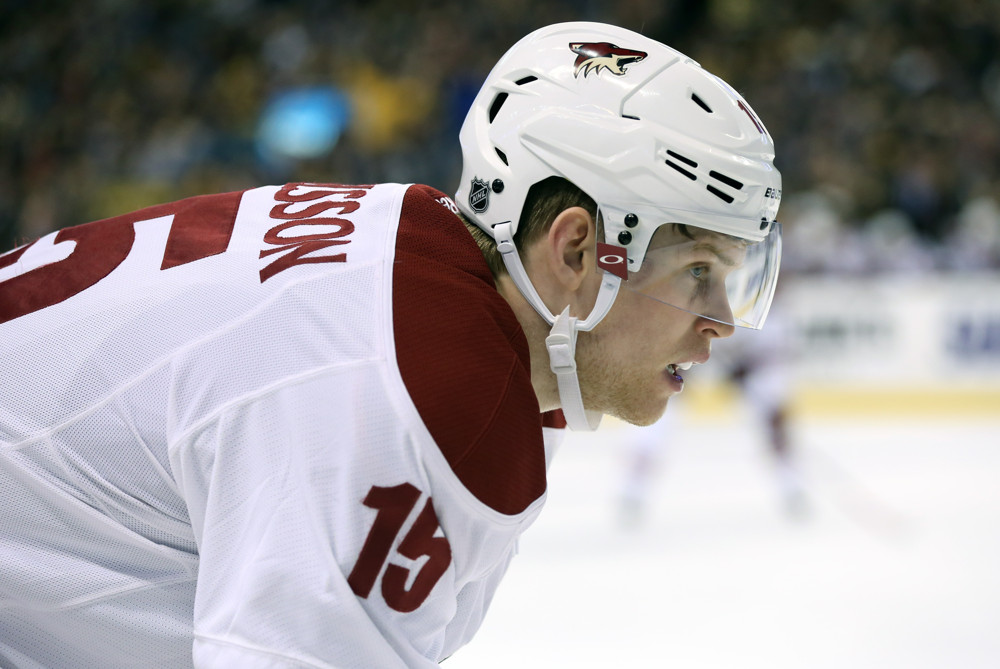 The Arizona Coyotes have been struck once again with the injury bug.

After losing both Mikkel Boedker and Martin Hanzal to season-ending surgery at the start of 2015, the Coyotes are now down two more players who could arguably provide compensatory top six offense — and as a result, fans are getting a sneak peak at players like Henrik Samuelsson.

Jordan Szwarz is up from the Portland Pirates on emergency recall to replace winger Lauri Korpikoski in the lineup; now, Samuelsson is up while captain Shane Doan is out day to day with a lower body injury. It’s a safe bet that unless Doan is able to return to the lineup by Saturday, the young forward will finish out the season as a part of the Coyotes lineup.

For the Coyotes, it will take the Buffalo Sabres failing to lose either of their last two games in regulation to fall to thirtieth place overall. Had they won their game on Tuesday night (and had the Edmonton Oilers lost theirs), the team could have snuck into the third to last spot — but as it stands, the Coyotes are almost certainly walking away in Sunrise, Florida with Jack Eichel. At this point, the season is coming to a close — but getting a chance to see what Henrik Samuelsson can do one last time before the franchise goes on vacation is far from the worst thing in the world.

Although he started off a little lethargic in the AHL, Samuelsson has finally hit his stride at the AHL level — after struggling to produce offense in the first half of his rookie pro hockey season, the former first round pick has managed to fire off fourteen goals and twenty-one helpers in sixty-five games with the Portland Pirates. That puts him fifth on the team in scoring, just above Lucas Lessio and Justin Hodgman.

At the NHL level, the Scottsdale native — who stands at six foot three and could become the team’s next big top six power forward — has only appeared in two games; he was a recall back in late February, when injuries and lethargic offense were becoming a huge issue for the franchise. He has yet to record his first NHL point, although three shots in two games at least put him on the board as a player willing to record scoring chances against two pretty decent teams (Samuelsson appeared against both the New York Rangers and the Boston Bruins).

It may seem like a frightening thing to watch the Coyotes place a twenty-year old forward on the ice in lieu of the captain who traveled to the desert with the franchise; considering Samuelsson has only been in two NHL games (and averaged bottom six minutes over both games, logging 11:34 ATOI against Boston and New York), that implies that the roster will require some serious shaking up.

Given the way the team has been playing, though — and no, that’s not meant to be a negative thing — adding a player who’s big-bodied and isn’t afraid to be physical may be the best-case scenario for both the team and Samuelsson.

Assuming Samuelsson is placed on a line with a few undersized players, he’ll be given the opportunity to prove whether he’s got the right balance of speed, offense, and physical aggression to make the NHL roster next season. The Coyotes have actually seen a near-equal number of scoring chances from players on all four lines — Tobias Rieder, Sam Gagner, and Craig Cunningham all recorded three or more quality scoring chances against the Calgary Flames earlier this week, with Cunningham finding the back of the net on one of them — so no matter who he’s paired with, the 21-year-old Coyotes call-up is likely to have a solid mentor on board. As he’s grown healthier over the course of the year — a concussion reportedly held him to limited minutes and scoring chances at the start of the 2014-2015 season — and he’s gained confidence in his rookie AHL season, Samuelsson has looked more like the promising prospect the Coyotes brought on board at the 2012 NHL Entry Draft.

They’ll take on the Vancouver Canucks in what could be Samuelsson’s third NHL appearance — and if he plays his cards right, he could earn a serious look as early as next fall.