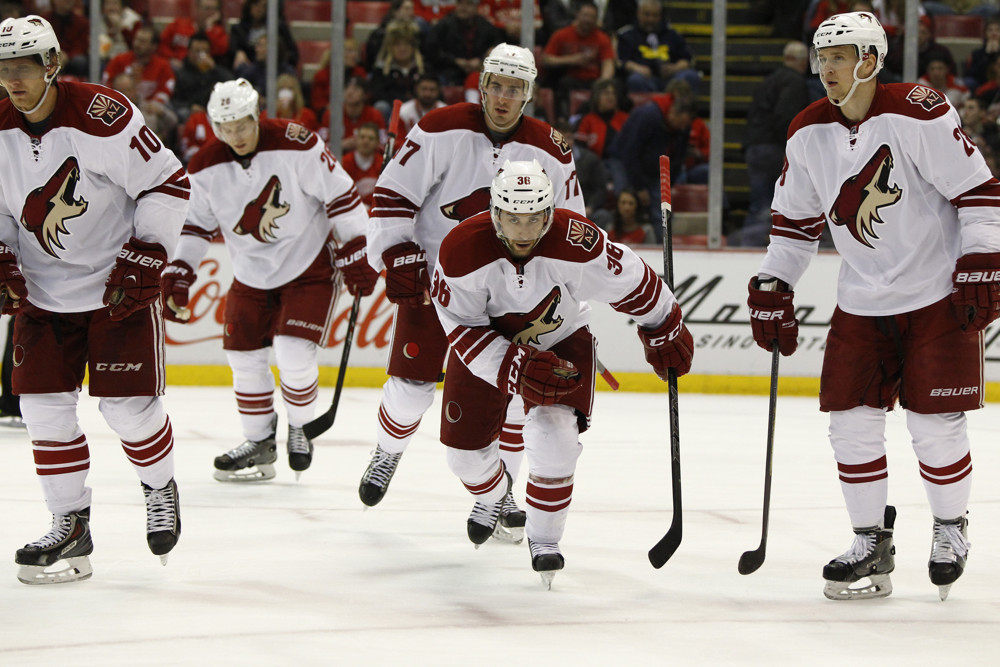 What happens when you mix a late-March NHL tilt between two teams well out of postseason contention with a fan base that thirsts for a return to winning and add a bona fide superstar in the upcoming Entry Draft? A freakish scene that left hockey fans laughing at viral videos and had pundits shaking their heads in disbelief.

There were 11 games on the NHL docket Thursday night, but it wasn’t Winnipeg’s game against Montreal in a fight for their first playoff berth since relocating to the city, or even fan favorite Andrew Hammond’s search for his 15th win of the season between the pipes for the Ottawa Senators that captured the imagination of the hockey world that night. Instead, it was the last place Buffalo Sabres playing the second-to-last place Arizona Coyotes in what the hype machine called the “McDavid Bowl,” “Tank Wars” and “The Dishonor for Connor Game,” among other titles.

Once the game started, it was probably one of the more bizarre scenes that hockey fans have seen in a while. The Coyotes took the lead just 7:55 into the game when Jordan Szwarz beat Sabres goaltender Matt Hackett, and that sent the crowd at Buffalo’s First Niagara Center into a frenzy. The Sabres eventually took Arizona to overtime, but when forward Sam Gagner scored his 13th of the season in the opening moments of the extra period and sealed the game for the visitors, the Buffalo crowd once again came to it’s feet.

After the game, Sabres defenseman Mike Weber spoke to the media and had some very poignant words about how the actions of the fans were just a bit too much for him.

I’ve always spoken extremely high of our fans. I don’t even know if disappointed is the word. They score that first one and our fans are cheering. Late penalty, they cheer. They cheer when they score to win the game.

What some people forget is that the players on the ice don’t tank. Some pundits have said that the actions of Coyotes General Manager Don Maloney would indicate a tank, but even that is debatable. The team lost both Martin Hanzal and Mikkel Boedker for the rest of the season due to injuries, a factor that is out of the organization’s control, while the trades of Keith Yandle, Zbynek Michalek and Antoine Vermette were about preparing for the future more than they were about losing some games down the stretch in the here and now.

With that said, some of Weber’s other comments after the game Thursday night seem to indicate that maybe his employer “embraced the tank” a bit too much, which led to the crazy scene in Buffalo.

He added, “This is two years in a row now. Physically, mentally, this sucks.”

What Coyotes Fans Can Learn

The hype machine and hashtags will start rolling again in a few days time because on Monday night these two teams will go at it again, this time in the Coyotes’ home barn of Gila River Arena. Fortunately or unfortunately for fans in Arizona (depending on what side of the fence you’re on), the Sabres fans gave the Coyotes fans a blueprint of how not to handle what is an awkward situation.

By this point we all know what McDavid can bring to the table for the Coyotes. We know he would be a massive prize for the franchise, we know he would provide star power in a market that craves superstars and we’ve all seen the comparisons to Sidney Crosby. In other words, no Coyotes fan out there would not want him playing for their team. But no matter how much they want it to happen, they can’t openly root against their own team in their own building, ever.

While Sabres fans will be chided about their actions by their players and some in the media for a couple of days, all will eventually be forgotten. Not so for Coyotes fans, where every gaffe they make and every empty seat in their home arena is magnified and used as evidence for a quick relocation of the franchise to another city.

It’s been a long season for Arizona’s players, management and fans, and everyone wants to see something positive to come out of it, but no matter how much Coyotes fans want McDavid in brick red, it’s best to keep those crossed fingers hidden and the cheers to their own guys.