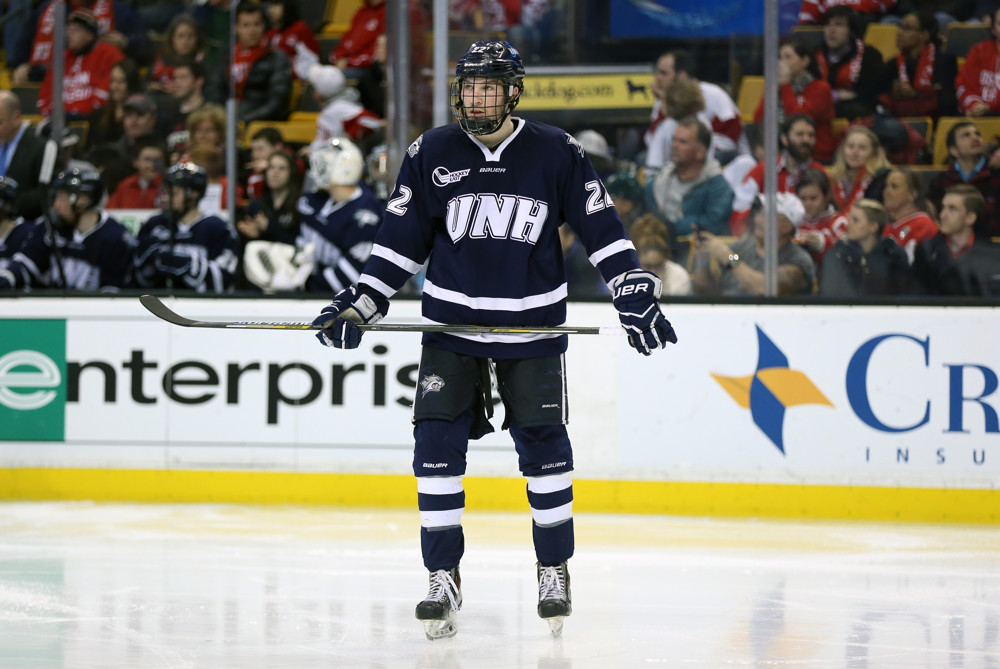 As the NCAA seasons winds down, more and more young hockey prospects are forging their futures with NHL clubs via entry level contracts.

Some are undrafted free agents, but others — like Brett Pesce of the University of New Hampshire — are simply making the choice to forgo their final years of NCAA eligibility to sign with the clubs that drafted them in years past.

Pesce was taken in the third round of the 2013 NHL Draft by the Carolina Hurricanes, who announced on Friday morning that they had signed the blue liner to a three year, two-way entry level contract. Per the club, he will make $650,000 his first season (assuming he makes the Hurricanes roster), then will get bumped to $700,000 the next season and $800,000 the year after that. Should he stay in the AHL, his salary will be $70,000 annually, while he takes some a signing bonus of $277,500.

Although Pesce is still a bit on the slight side — he’ll probably need to add some bulk before he gets ice time with the Hurricanes — he’s a tall kid for his age at six foot three; he’s reporting to the Charlotte Checkers of the AHL, where he should remain for the rest of the season. The advantage he has, though, is that he started his college career a season earlier than he was expected to — so rather than reporting to Charlotte with only two NCAA seasons under his belt, he’s got three.

He’s projected to have a talent upside worthy of a primary power play quarterback, so if he can get bigger and adjust to the pace of the game at the NHL level the Hurricanes will have something good on their hands. Unlike other puck-moving defensemen (such as Keith Yandle of the New York Rangers), he’s got better defensive positioning and control in his own zone — so for Carolina, there’s a lack of unforced turnovers in their future. His only true downside would be that he’s easy to get pushed around, which is consistent with guys who are as slight as he is. He’s got a tall frame, but a lack of bulk makes him easy to move aside — and while shorter, stockier players have the advantage of a low center of gravity, he’s got little beyond his long reach and faster legs that give him the advantage over more solid players.

New Hampshire is coming off a mediocre season, but Shutdown Line’s Corey Sznajder put him on his Top 25 under 25 for his solid positioning and strong hockey sense. Written back in 2013, the profile highlighted Pesce’s ability to fit in a top four pairing role as a freshman on a college team just one game away from the Frozen Four — and as the team signed him straight out of his junior year campaign, it’s likely they see the same promise.