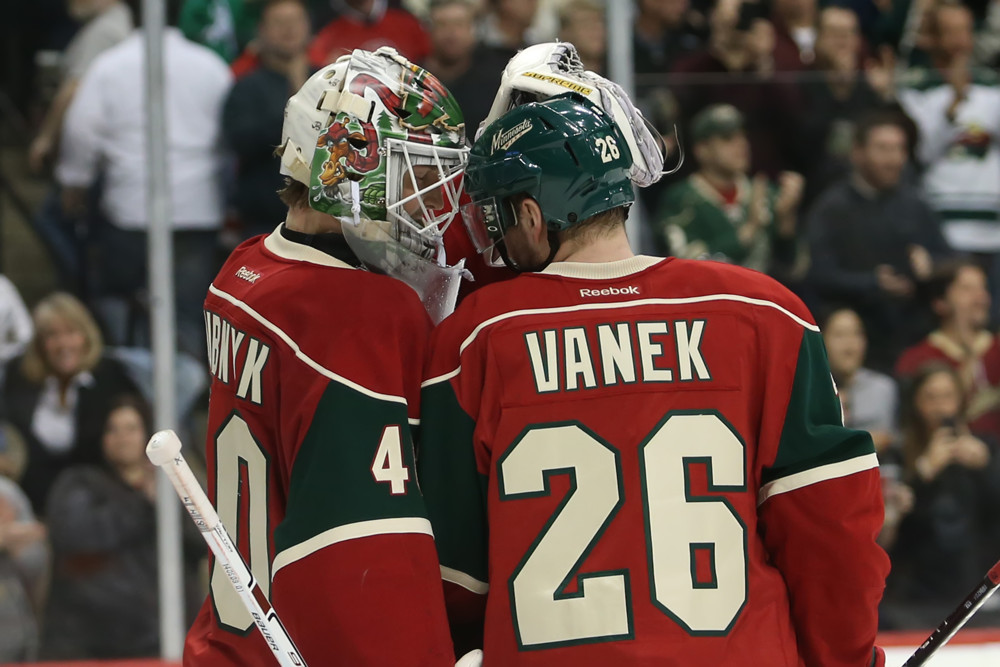 The playoffs start in three weeks, and this is the time of year when goaltending decides just about everything. Yes, you have to have scorers up front. And yes, you need a steady blue line to survive in the postseason. Not to mention gritty role players that are willing to go into the dirty areas and do the tough jobs just to advance the puck up the ice. Those things are all pivotal, but their value fades pretty quickly if your netminder is constantly looking behind him to see where the puck went.

To that end, the spotlight is about to fall on some key goalies in the Central. It’s the one division where every team is technically still in playoff contention (don’t give up, Dallas fans), and it’s the one division that seems likely to send five clubs into hockey’s second season. With that in mind, here’s a quick look at the goalie situation for each franchise as we hit the stretch run.

Chicago Blackhawks Current No. 1: Corey Crawford (signed through 2019-20) Current Backup: Scott Darling In the System: Antti Raanta Playoff Outlook: Ok, so maybe goaltending doesn’t mean everything – at least not if you have Jonathan Toews and Patrick Kane on the roster. Crawford won’t necessarily have to steal wins for the ‘Hawks to have playoff success, but he’ll still have to be at the top of his game. And while he sometimes gets overlooked on this roster, he is currently enjoying the best statistical season of his career (29 wins, 2.21 goals against average and a .924 save percentage). He also happens to already have a Stanley Cup ring, if that sort of thing is important to you. Behind Crawford, Darling only has 10 career NHL starts, but his 1.97 GAA and .936 save percentage indicate that he knows his way around the crease. And if something goes really sideways, Raanta – who had even better numbers than Darling in limited action with Chicago earlier this season – is currently stockpiling wins in AHL Rockford.

Colorado Avalanche Current No. 1: Semyon Varlamov (signed through 2018-19) Current Backup: Reto Berra In the System: Calvin Pickard Playoff Outlook: Well, the good news is Varlamov is 6-0-1 with a 1.43 GAA and .956 save percentage so far in March. And his Vezina candidacy last year is a reminder that he might be able to keep this up through the end of the regular season. Of course, the bad news is the end of the regular season is probably the end of Colorado’s entire season, due to the slow start Patrick Roy’s squad got off to this year. Pickard is likely next in line behind Varlamov, even though he’s currently suiting up for Lake Erie. The 22-year old netminder has been impressive when called up this season, and is basically only down in the AHL so he can pick up more valuable playing time.

Dallas Stars Current No. 1: Kari Lehtonen (signed through 2017-18) Current Backup: Jhonas Enroth In the System: Jack Campbell Playoff Outlook: Much like the Avs, the Stars are likely going to be left on the outside looking in when April 12 rolls around. Lehtonen isn’t having his best season – in fact, you could make the case he’s having his worst season since arriving in Dallas. His 2.82 GAA and .908 save percentage are a far cry from the 2.41 GAA and .919 save percentage he posted, en route to leading the Stars into the playoffs last spring. They’ll need more of the latter from Lehtonen, if they plan on making up ground in arguably the NHL’s most competitive division next season. At the AHL level, Campbell is the former first-rounder (No. 11 overall in 2010) with upside, but Jussi Rynnas has actually played more and posted better numbers this season.

Minnesota Wild Current No. 1: Devan Dubnyk (signed through the end of this season) Current Backup: Darcy Kuemper In the System: Ummmm… Playoff Outlook: Wait, Minnesota has goalies that aren’t named Devan Dubnyk? All he’s done since coming over from Arizona is start 31 consecutive games, winning 23 of them while notching five shutouts, just for good measure. Who needs anyone else? This is going to last forever!

Nashville Predators Current No. 1: Pekka Rinne (signed through 2018-19) Current Backup: Carter Hutton In the System: Juuse Saros Playoff Outlook: Rinne is the reason the Preds are legitimate Cup contenders. And despite the team’s recent struggles, he’s still a likely Vezina finalist. There’s been a lot of good goaltending around the NHL this season, but it’s tough to imagine picking too many goalies over Rinne in a must-win scenario. Hutton filled in admirably for him when he was out earlier this season, and looks like a decent emergency fill-in, while Saros was recently tabbed by The Hockey News as the No. 5 prospect in Nashville’s system.

St. Louis Blues Current No. 1: Brian Elliott (signed through 2016-17) Current Backup: Jake Allen In the System: Jordan Binnington Playoff Outlook: Often overlooked, Elliott has posted really nice numbers (24-12-3, 2.16 GAA, .921 save percentage) this season. The team in front of him might be the best lineup the Blues have assembled in recent memory, which is nice. But the pressure is about to get ratcheted up about 900 percent in this year’s playoffs. Anything less than a deep run will be considered a major disappointment for a club that has been dominant in the regular season, but unable to get much going in the postseason lately. St. Louis scores 2.93 goals per game – good for No. 2 in the Western Conference – but Elliott is going to have to play the best hockey of his career in the big games to get the Blues where they want to go.

Winnipeg Jets Current No. 1: Ondrej Pavelec Current Backup: Michael Hutchinson In the System: Connor Hellebuyck Playoff Outlook: Considering the injuries they’ve endured this season, the Jets probably should’ve been done awhile ago. Instead, they’re not only in playoff contention, they currently occupy one of the wild card spots. Hutchinson has come up huge as a rookie this year, though his play has trailed off of late. Fortunately, Pavelec has stepped up, going 4-0 with a 0.98 GAA and .967 save percentage in his last four outings. Winnipeg obviously doesn’t have anyone with the resume that Jonathan Quick has in Los Angeles but, compared to some of the other teams they’re competing with for those final playoff spots, the Pavelec/Hutchinson duo might just be able to get the job done.