All Aboard the Tampa Bay Lightning Bandwagon

All Aboard the Tampa Bay Lightning Bandwagon

The New York Rangers may have already clinched this year’s Presidents’ Trophy, but the NHL’s best regular season team is anything but a shoo-in to return to the Stanley Cup Final for the second straight year. Despite New York’s recent five-game win streak, it’s the Tampa Bay Lightning that are gaining attention, and for good reason.

So why is this the year to climb aboard the Lightning bandwagon?

Throw out everything you know about the historic trends of past Presidents’ Trophy winners. Every year is different, and in the playoffs, the best team wins. Unfortunately for this year’s Rangers, the best team isn’t necessarily the one that amasses the most points throughout the season.

The Bolts are equipped with arguably the most balanced team in the league, boasting the most goals scored with 259, while ranking 19th in the NHL with only 29.6 shots per game. A disparity such as that suggests Jon Cooper’s squad is not only making their shots on net count, but in crucial situations.

In five-on-five situations that are “close,” Tampa’s 54.1 percent SAT percentage trail only the Winnipeg Jets by less than a single percentage point. Their 54.5 percent shots on goal percentage leads the entire league, while their scoring chances for percentage of 53.5 percent trails NHL-leading Nashville by 1.1 percent – all while tending to a list of injuries.

With Tampa Bay’s catalog of injuries, which include the previous losses of Victor Hedman, Jason Garrison, Braydon Coburn, Andrej Sustr and Tyler Johnson, the Bolts continued to plow through the later portion of their schedule, going 7-3-1 since Mar. 16’s defeat of the Montreal Canadiens.

“Adversity is probably an overused term,” Lightning coach Jon Cooper told Arpon Basu of NHL.com after March 30’s 5-3 win over the Montreal Canadiens. “But to patch together the [defense] corps we did, and then to lose [Hedman] in the third and to put Boyle back down there, it’s a tribute to those guys. They stayed engaged, they had a will to win this hockey game.”

With three other 100-point teams in the Eastern Conference, the Bolts are hardly the only team to overcome obstacles throughout the marathon of a season. It’s what Cooper’s team has done against the Conference’s heavy hitters, though, that sets them apart.

Led by 72-point scorer and captain Steven Stamkos, the Lightning own a combined record of 17-8-3 against eight of the East’s other top teams.

Tampa Bay is stocked with four different skaters with 60 or more points, along with Tyler Johnson recently joining Stamkos in the 70-point club. Even with the even distribution in scoring, the Bolts unquestionably feed off of their captain, who’s notched 28 points against the teams listed above.

Stamkos scores against everybody. Like all 50-goal guys, Stamkos is an equal-opportunity abuser, scoring against the bad teams with shoddy goaltending as well as good teams with elite goaltending. But what’s critical is Stamkos doesn’t disappear in big games. Instead, he makes an impact. He changes those games. — Tom Jones, Tampa Bay Times

Although Stamkos has been held scoreless in three contests against Pittsburgh, the seven-year veteran has torched the Rangers and Canadiens with seven points against per team.

With Hedman’s return against New Jersey on Thursday, and Coburn’s impending recovery, the Lightning are getting healthy at just the right time. Goalie Ben Bishop has yet to appear in a single playoff game throughout his previous six seasons in the league, but after besting his career-high in wins with a 38-13-5 record, there should be little concern surrounding the 6’7”, 209-pound netminder.

Spread out all the evidence and verdict points to Tampa Bay. The supreme depth says so. The obvious roster improvements say so. And this team equally satisfies the stat geeks who favor possession and the dinosaurs who just care about goals. The Bolts have the NHL right where they want it, even if Stevie Y doesn’t want anyone to know that. — Matt Larkin, The Hockey News

Recent history shows us that deep playoff runs are ignited by momentum heading into the playoffs. Dating back to the 2010 Chicago Blackhawks’ Stanley Cup championship team, every team that outlasted the playoff field in the end won at least 10 games from the month of March through the the end of the regular season.*

This year’s Lightning team is no different, fitting the mold with an 11-5-2 mark from Mar. 1 through Apr. 9. Tampa Bay also heads into the season finale against Boston outscoring their opponents 8-3 in their last two games, both wins.

But while everything seems to be clicking for the Lightning, last year’s team was equally, if not more hot, than this year’s team. Jon Cooper’s squad blazed through the final month of the season, going 5-2-0, winning the final four games on the schedule.

The Lightning were quickly silenced in the playoffs, however, falling to Montreal in a four-game sweep in the quarterfinal round.

I kept saying the Bolts would beat the Habs in 6 last year and I was wrong. So I'm not gonna make any rash assumptions against Detroit.

Last year was last year, though. After all, they were without the services of Bishop in net due to injury. A case can also be made that Ryan Callahan was still adjusting to his new surroundings after being traded at mid-season from the Rangers. Further, comparing this season to last favors the current cast, with the overall additions added both in the offseason, and at the trade deadline.

At the trade deadline, [Steve] Yzerman also added veteran Braydon Coburn from the Philadelphia Flyers. Tampa Bay’s defense is bigger and far more mobile and experienced than it was last season when it was bounced by Montreal. Matt Carle, Stralman and Coburn have reached the Stanley Cup Final before. — Kevin Allen, USA Today Sports

“We’re deeper,” said Cooper via Nicholas J. Cotsonika of Yahoo Sports. “I don’t as a coach feel like I have to match lines as much anymore. I can put Boyle’s line out versus whatever line and not even really lose sleep about it. So that’s, I guess, the difference. Just more confidence in the group we have.”

Health, of course, will stand to be the factor for not only Tampa, but every playoff team as well. And while the Lightning have absorbed their injuries to this point, an injury at the wrong time could create a domino effect, resulting in what the Bolts experienced last year.

“The big question is, are you healthy? And is your goaltender playing well?” said Cooper to the Tampa Bay Times’ Joe Smith. “Usually that spells good start to your playoffs, and that’s what you need.”

Barring any inopportune setbacks with injuries, the Bolts are now arguably the most dangerous team in the playoffs. And since the postseason is yet to begin, hopping on the Tampa Bay Lightning bandwagon now could make you look like a genius later in June.

The 2013 Chicago Blackhawks went 10-2-1 in the month of April. Because of the lockout-shortened season, the schedule was more condensed. 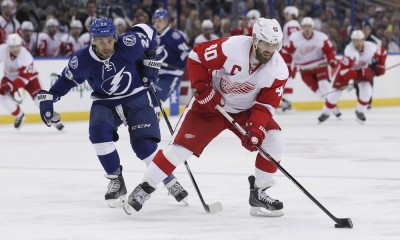