The National Women’s Hockey League is a highly progressive league.

New Year’s Eve day, the Boston Pride will play an outdoor exhibition game against the CWHL’s Montreal Canadiennes. Two weeks ago, the New York Riveters took part in a three-game international series in Japan, facing off against Smile Japan. When the league launched, the NWHL’s official website shared all salary information.

In all three cases, the women’s league has shown a willingness to embrace innovative ways to appeal to fans.

In keeping with this philosophy, the NWHL has embraced the advanced statistics movement that is sweeping over the NHL. Led by Today’s Slapshot’s Carolyn Wilke, a team of dedicated people are tracking games. These volunteers are recording the basic shots information needed to create analytics like Corsi, PDO, 5-on-5 save percentage, and much more.

Presented here are some interactive data visualizations I’ve created to help present the data collected by Carolyn and her team so far. I’ll highlight some skater and goalies that are deserving of some attention for their great play but, in the end, I hope you’ll use the vizzes to search through for yourself. On with the data…

*the tracking team has completed all games up until Nov. 22nd. All data is based on that timeframe.

A pillar of modern stats work, Corsi For percentage (CF%) is key for identifying which players dominate the puck. Any shot attempt for a player counts in favour of that player and all of their on-ice teammates. Conversely, shot attempts against a team count against all on-ice players for that team.

Here’s a look at the league as a whole. 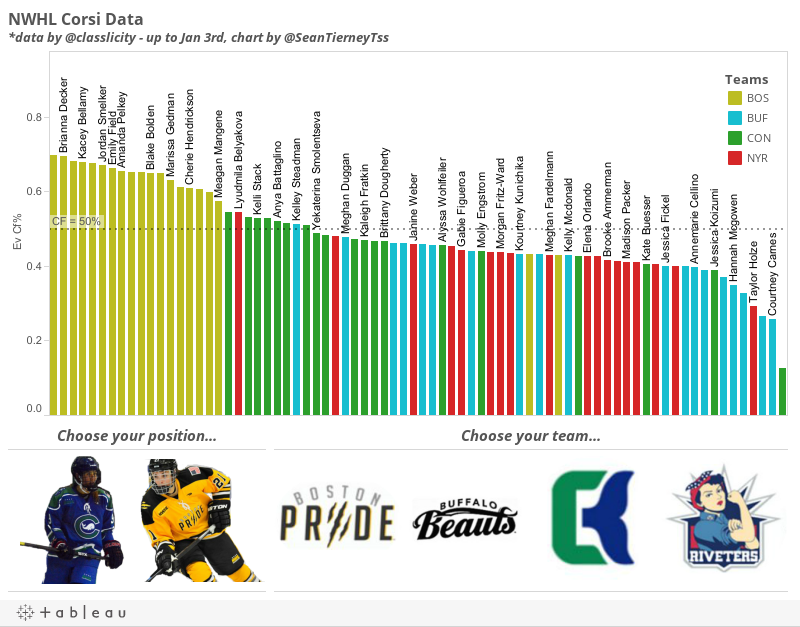 First, a few notes on the chart. Each colour represents a team, as per the legend. The team logos can be clicked on to highlight players from that team only. The player photos sort the graph by position. Molly Engstrom represents the defenders, Hilary Knight represents the forwards.

The Boston Pride scored easily and often through the first three games and dominated possession throughout the data set available. As pictured above, every skater on the team posted Corsi For percentages above 50 percent.

Star forwards Brianna Decker and Hilary Knight posted even strength possession rates above 70 percent, which is extreme and should be expected to recede as more data becomes available. Forwards Emily Field and Corinne Buie lead the team overall. The Pride’s Blake Bolden leads all NWHL defenders and places third overall in the league.

As the NWHL representatives for the outdoor game on December 31st, Boston will have a chance to demonstrate their puck possession skills against a brand new opponent. This will be a telling test of the team’s puck management abilities.

While the Pride have dominated the Corsi game, there’s lots to see around the rest of the league.

The Riveters struggled to maintain puck possession in the available data. Lyudmila Belyakov has posted an impressive 54 percent Corsi For. This is all the more impressive because of the struggles throughout the rest of the lineup. The Riveters have played a couple of strong games in December and new data should improve the overall possession numbers for the team.

Early on, the Buffalo Beauts were plagued by work VISA issues, which led to reliance on practice roster player to fill out their lineup. With this issue now resolved, the team is clawing back in the puck possession game. Notable defenders Megan Bozek and Emily Pfalzer struggled under the early-season onslaught. Bozek suffered particularly, posting a 37 percent CF mark. Skeats and Grigg lead the team, each posting possession numbers better than 50 percent.

As more data becomes available, expect to see some extremes level out. The Pride may continue their early-season dominance but Ward, Skeats, and Grigg seem to have the potential to vault into the upper tier of the NWHL’s puck possession ranks.

Thanks to the excellent work of Wilke’s tracking team, 5-on-5 goalie data is available for the league. These numbers are important as overall goalie stats are sometimes heavily impacted by opposition power plays. In the graph below, all goalie data is from even-strength situations.

Fujimoto has established herself as the class of the league but watch for McLaughlin’s very good numbers to improve as the data set grows. She performed admirably behind a depleted lineup early in the season.

PDO is a measure of team luck, generated by adding a team’s on-ice shooting percentage and on-ice save percentage. Over time, we expect this number to trend towards 100 for any team. Teams with lower PDOs can be said to be suffering from “bad luck.” Teams with higher PDOs are enjoying “good luck.” So far in the NWHL data, the teams break down much as you might guess.

The Whale haven’t dominated puck possession but both their shooting percentage and save percentage are above league average. The Whale have a total PDO of ~102. This mark isn’t highly unsustainable but the Whale have benefitted from early-season fortune.

The Riveters and Pride both score ~100 in PDO, though the Rivs have a slightly low shooting percentage. Both teams were luck-neutral in the data available.

To add to early season roster problems (or, as a result of these problems), the Beauts have registered below average marks in shooting and save percentage. However, the team’s PDO of 98.75 is likely reasonable enough to last all season. Studies of NHL data show that the range for PDO falls between 98 – 102 over the course of a season. Whether this holds true for a four-team league will be interesting to note for the NWHL.

For now, the data set remains small and all numbers should be qualified in that way. There are many interesting notes to take from the available data and that file of statistical information will grow throughout the season. There’s much to be excited for from Wilke and her stats team as the year goes on.

The most important take away for now is the highly progressive nature of the NWHL in their inaugural year. The league has openly embraced advanced stats, something no other professional league has done so quickly. This spirit of innovation and a willingness to embrace opportunities like international matchups, outdoor events, and advanced stats, speaks volumes about the leadership of the NWHL. This is a league that is growing. Fast.

For access to any of these charts, please check here: https://public.tableau.com/profile/sean.tierney#!/. All charts are customizable and downloadable. For questions about anything here, please reach out on twitter (@SeanTierneyTss).