Don’t look now, but the only undefeated team left in the NHL is the Vancouver Canucks.

Yes, those same Vancouver Canucks who were supposed soundly stink up the joint this year. The same team that Vegas had at the longest of all odds of all to lift Lord Stanley’s Cup.

And while it is still early returns – and some of those returns are statistical anomalies that are virtually impossible to emulate – their strong defensive systems play, coupled with the stellar goaltending of the emerging Jacob Markstrom, is giving fans reason for optimism in the early days of what was supposed to be a dark campaign.

For his part, Markstrom finally seems to be rounding into that goaltender upon whom much was once expected. At 6-foot-6, he is blessed with preternatural physical gifts and fits the archetype of goalies popular in the league today. When the Canucks acquired him in the Roberto Luongo deal in the spring of 2014, he was seen as a floundering project – and indeed, in his first year with the club, he didn’t look destined to fulfill his immense potential.

Last year, however, Markstrom began to turn the corner – evidenced by his selection to Team Sweden’s World Cup entry, and the three-year contract gifted to him by the club prior to this season. And to start the year, he has done everything to fulfill the Canucks’ faith.

With Ryan Miller going down to an early injury, Markstrom has filled in admirably in the starter’s spot – he has allowed just five goals in three starts, posting a .932 save percentage and a 1.65 goals against average. And these aren’t fluky numbered buttressed by a lock-down defensive system, either: He was the club’s best player against Buffalo on Thursday, and saved their bacon throughout rocky second and third periods.

Beyond Markstrom, the influence of new assistant coach Doug Jarvis – and more specifically, the neutral zone coverage system he employs – has been felt early on. Last year, the team suffered as one of the worst puck possession clubs in the league. Their surrendering of odd-man rushes and neutral zone breakdowns became the stuff of legend. 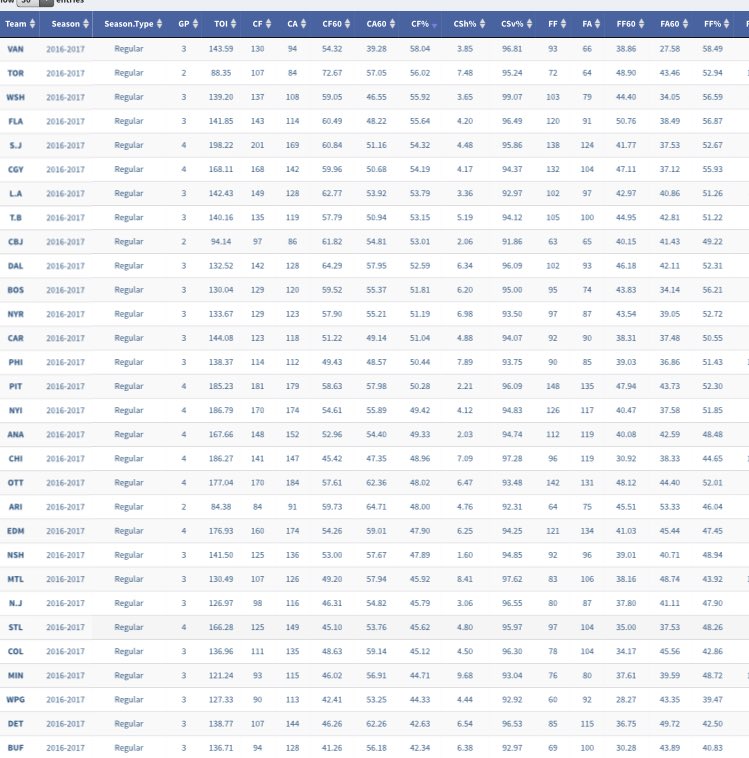 Prior to Thursday’s game, the Canucks sat first in CF% – a surprising mark for a team that struggled so mightily to possess the puck last year.

This year, under Jarvis’ system of quick zone exits and responsible forward back-checking, the club has managed to significantly cut down on their mistakes – and in turn, become a respectable, possession-based club. And Jarvis’ contribution to this hasn’t gone unnoticed in Vancouver, either.

That being said, the team’s penchant for the comeback – they didn’t hold the lead for a second in any of their first three wins, coming back to win all three in extra time – isn’t sustainable. Nor is the reliance on stellar show-stealing from starting goaltenders. The club is going to need to find fast remedies for their most immediate problem – scoring.

Through their first four games, the Canucks were tied for 26th in the league in goal production – a number not unfamiliar for a club that finished 29th in that realm last year. Willie Desjardins went as far as to split up the Sedins for a time on Thursday night – a John Tortorella favorite – in an effort to ignite scoring from other units. To this point, the club has been buoyed by the production of the line of Markus Granlund, Jannik Hansen and Brandon Sutter, the latter of whom leads the club with four points in four games. But it certainly isn’t enough to build a Cup contender on, and they need the likes of the Twins, Loui Eriksson and Bo Horvat to step up and ignite a quiet offense.

16 Oct 2016; Vancouver Canucks Center Brandon Sutter (20) celebrates his game winning Overtime against the Carolina Hurricanes during a game at Rogers Arena in Vancouver BC. (Photograph by Bob Frid/Icon Sportswire)

And there is the matter of the club starting with four consecutive games at home – a welcome gift from the NHL schedule makers – and doing so with the kick-in-the-rear that comes with being so roundly lambasted by experts and predictors in the off-season. The unifying boost that comes with trying to prove the doubters wrong can only last so long, and will fade as the dog days of travel and tribulation set in.

So what we’re saying is, pump the brakes a little on the Canucks – but not so much that you’re liable to jam them. This is a team that, as we said earlier, is better than you think. Are they first-in-the-NHL, 90’s-era New Jersey Devils-better? Highly unlikely. But what they appear to be is a team that is ready to establish an identity as a smart, structured, systems-based team that wins games through the unexciting and uninspiring – but ultimately effective – frequency of 2-1 and 3-2 scorelines.

And considering where people reckoned they’d end up before the year began, that ain’t half bad.

Around the FRS Network

To Top
This site uses cookies to improve your experience. Read more.