Red Wings Can Learn From the Caps’ Misuse of Mike Green

The Detroit Red Wings made a significant addition to their blue line this offseason when they signed Mike Green to a three-year, $18 million deal. As a right-handed defenseman with elite offensive tools, Green fills a void on Detroit’s blue line for a reasonable dollar amount and a team-friendly term.

There is no questioning Green’s offensive talent and production. But his much-maligned defensive abilities are stronger than their reputation and, especially during the latter part of his time with the Washington Capitals, he was underutilized in game situations when teams tend to be more defense-oriented.

The Red Wings would be wise to learn from the Caps’ misuse of Green and use him more often when protecting leads and killing penalties.

The Caps (mistakenly) used Green the least out of their five regular defenders last season but significantly bumped his ice time up when they were trailing. The focus here is Green’s ice time when the team was protecting a lead, which is when he was the least used defender and saw his lowest TOI% (30.65%) among the three score states.

Making Green their least used defender when leading was a mistake. Here’s how the Caps fared, when leading, with Green on the ice versus when he was off the ice, in terms of shot attempts and goals against. The graph is courtesy of War on Ice. 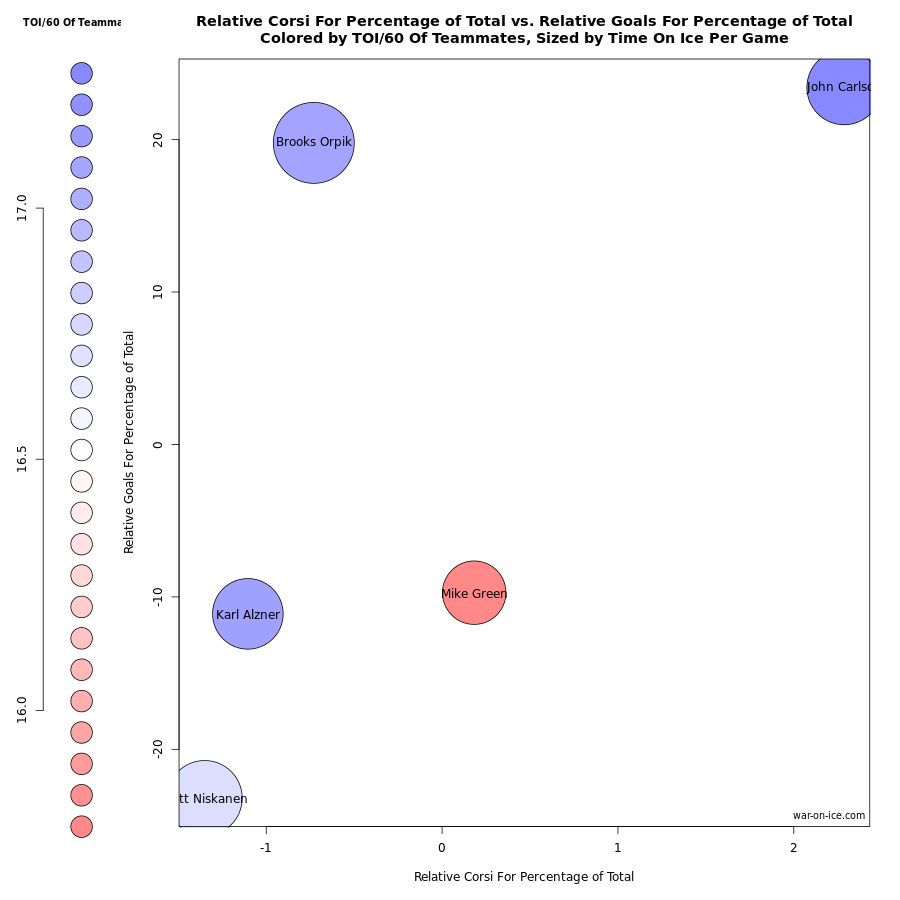 Green was the Caps second best defender in terms of shot attempts against (x-axis) when leading in 2014-15, albeit by a not large margin. The team didn’t do as well in terms of goals against the (y-axis) when Green was on the ice, but he still had the third best differential among the five defenders.

The color shade here is important as it indicates the quality of teammate each player shared the ice with. So, while Brooks Orpik was being carried around by John Carlson, and Carlson was spending a lot of his minutes with Alex Ovechkin and Nicklas Backstrom, Green was spending time with the likes of Jack Hillen and Tim Gleason. This further underscores the fact that Green was one of the Caps better options when protecting a lead, but was used far less than any of the team’s other five regular defenders.

The Red Wings could benefit to learn a lesson here and use Green more when they are leading. The results may become even more impressive if they deploy Green with skilled players more often than the Caps did.

Green isn’t thought of as a penalty killer and hasn’t been used as one much in his career. Over the past three seasons, he has skated just 104 minutes while his team has been shorthanded. But the numbers suggest the Red Wings could benefit from deploying Green more often during shorthanded situations. The graphs below include the six defenseman who have skated 100-plus shorthanded minutes for the Caps while they’ve been shorthanded since the start of the 2012-13 season.

Using just Caps players here is important, as the penalty kill was so awful under Adam Oates that comparing them to players around the league would be unfair.

First is unblocked shot attempts against per 60 minutes of shorthanded ice time.

The Caps allowed 71.53 unblocked shot attempts per 60 minutes when Green was on the ice during shorthanded situations. This ranks seconds only to Matt Niskanen.

Next is scoring chances per 60 minutes, as defined by War on Ice.

Opponents see fewer scoring chances per 60 minutes when Mike Green is on the ice (49.21) than any of the other defenders. That sounds like a guy that should be penalty killing fairly regularly.

Here’s a look at how well each of the defenders limited goals against on the PK.

Since the start of the 2012-13 season, the Caps have given up 0.57 goals against per 60 minutes with Green on the ice when shorthanded. This ranks first among the 188 defenders to have played at least 100 PK minutes during that time. Green’s on-ice save percentage of 98.98% is unsustainable, but his underlying numbers are strong as well.

The Caps didn’t consider Green one of their primary options when protecting leads or killing penalties. Given the fact that he’s proven to be pretty effective at limiting the opponents’ offense during these situations, the Red Wings would be wise to learn from the Caps’ mistakes and use Green in these situations.

Green is a primary PP option, so the Red Wings may run the risk of overusing him if they play him in all of these situations. But this wasn’t the situation in Washington, where Green didn’t play these minutes because the Caps sheltered him. The Red Wings will be better off if they don’t shelter Green as much as the Caps did.